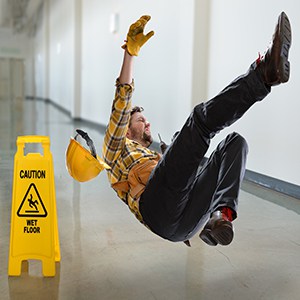 On October 25, 2018, after a three day jury trial before the Honorable Richard Hughes in Luzerne County, PA, a jury of twelve returned a resounding $800,000.00 verdict for a 70 year old woman who was injured while picking up her grandson from daycare in West Hazelton, PA.

On February 4, 2014, my client had gone to pick up her grandson from daycare in the borough of West Hazelton. The day care did not have a parking lot and instead expected it’s customers to pull up along the curbside in front of the building. It had snowed the night before and the daycare, instead of removing all of the snow from the sidewalk, merely shoveled a small footpath and piled the rest of the snow along the curb line. While walking back to the car carrying her 3-year-old grandson, my client fell and suffered a fractured ankle and back injury which eventually resulted in an L3-L5 lumbar spine fusion surgery.

At trial, Attorney Troy Crichton was able to convince the jury that the daycare negligently created a dangerous obstacle for their customers when they knew or should have known that people park along the sidewalk to pick up their children at the daycare.

The Defendant Day Care argued that our client was at fault for stepping into the snowbank they created and then argued that her back injuries were degenerative in nature and not caused by the accident. Overly confident, in their position and belief that a northeastern Pennsylvania jury wouldn’t find liability in a snowfall case, Defendants made no offer to resolve the case.

The jury of 12 saw through this thinly veiled attempt to shift the blame and found overwhelmingly in favor of my client. After four years of pain, suffering, and heartache, the jury returned a verdict of $800,000.00 for a lovely woman, wife, mother, and grandmother who deserved every penny of it.

Have you been injured in a slip and fall accident in Pennsylvania?

If you are someone close to you has been injured in a slip & fall, trip and fall, car accident, nursing home neglect or any type of premises liability accident in Philadelphia, Montgomery, Delaware, Chester, Luzerne, Berks or the surrounding counties. Call Troy R. Crichton at (267) 225-3317 today. The consultation is free. The results speak for themselves!