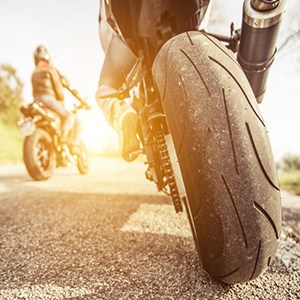 David L. Hough’s 1970 era book Proficient Motorcycling is still the best manual for a beginning Motorcyclist and overall motorcycle safety. I dust it off and review it at least once a year. I highly recommend reading it cover to cover. In addition to the basics of riding it has several safety tips and primers on how to deal with obstacles, animals and angry drivers. Throughout the years of riding in an urban environment I’ve also come up with a few tips:

1) When stopped at red lights, I flash my brake lights for visibility.

See and be seen. Many years ago I had a friend who was killed just sitting at a stoplight. Just thinking about the senseless accident makes my blood boil. The driver coming up behind him simply didn’t see him or the notice his motorcycles small taillight and plowed right into him. There was nothing he could do. Motorcycle lights are notoriously small and some like to make them smaller or eliminate them all together. However, the human eye is drawn to flickering, so when stopped at red lights I tend to play with my handbrake, and flicker out the beat of the tune I’m humming until I’m sure those approaching lights are going to stop.

Always give yourself an out, and keeping the bike in gear when stopped at lights is good practice. Another good practice is pulling to the side when you stop. It’s a practice that saved my life. A few years ago I was out for a wonderful summer ride heading west towards Philadelphia on Ridge Avenue. After Ridge passes Laurel Hill Cemetery the road sweeps right and Hunting Park merges with Ridge and Ridge continues into North Philly. There is a light that controls the merge and the light is immediately after a fast sweeping turn. I know this, most people from Philly know this, the kids driving the 2 ton U-Haul behind me, clearly did not know this. I had stopped towards the shoulder on an angle with my rear wheel in the right most part of the lane. Seconds later, they tore around the corner, saw the red light, and slammed on the brakes. Unable to stop, the U-Haul buckled, swerved left and went straight into the merge. There was no traffic coming, but if I had been in the left part of the lane I wouldn’t be here. The hair on my neck stood up that day and I’ve been counting my blessings ever since.

3) Don’t trust a vehicle’s turn signals, instead look where their tires are pointed.

It’s well documented that the #1 cause of motorcycle accidents is a left turning driver “who didn’t see you” trying to go through an intersection. All motorists have a tendency to forget to use their signals whether turning or pulling out in traffic. However, when approaching an intersection look at the vehicle’s tires. There’s a 100% chance they’ll be pointing in the direction that driver is planning on going.

4) Know your environment and how to best navigate it.

Light rain? Stay the away from the trolley tracks and don’t cross at an angle. Riding through Fairmount, Fishtown, Northern Liberties, or the latest epicenter of gentrification? Watch out for those slippery steel plates they put over the road when running new construction lines. Cobblestones? Why are there cobblestones here? Is it 1850 or just Old City? Might have to get out the saddle to help the suspension do its job. Riding through Southwest or South Philly during the summertime? There will be kids chasing balls into the street, so slow down. Plus, children love checking out motorcycles.

Despite your best precautions, accidents happen. If you’ve been injured in a motorcycle accident contact Troy R. Crichton, Esq. at (267) 225-3317 for a free consultation.