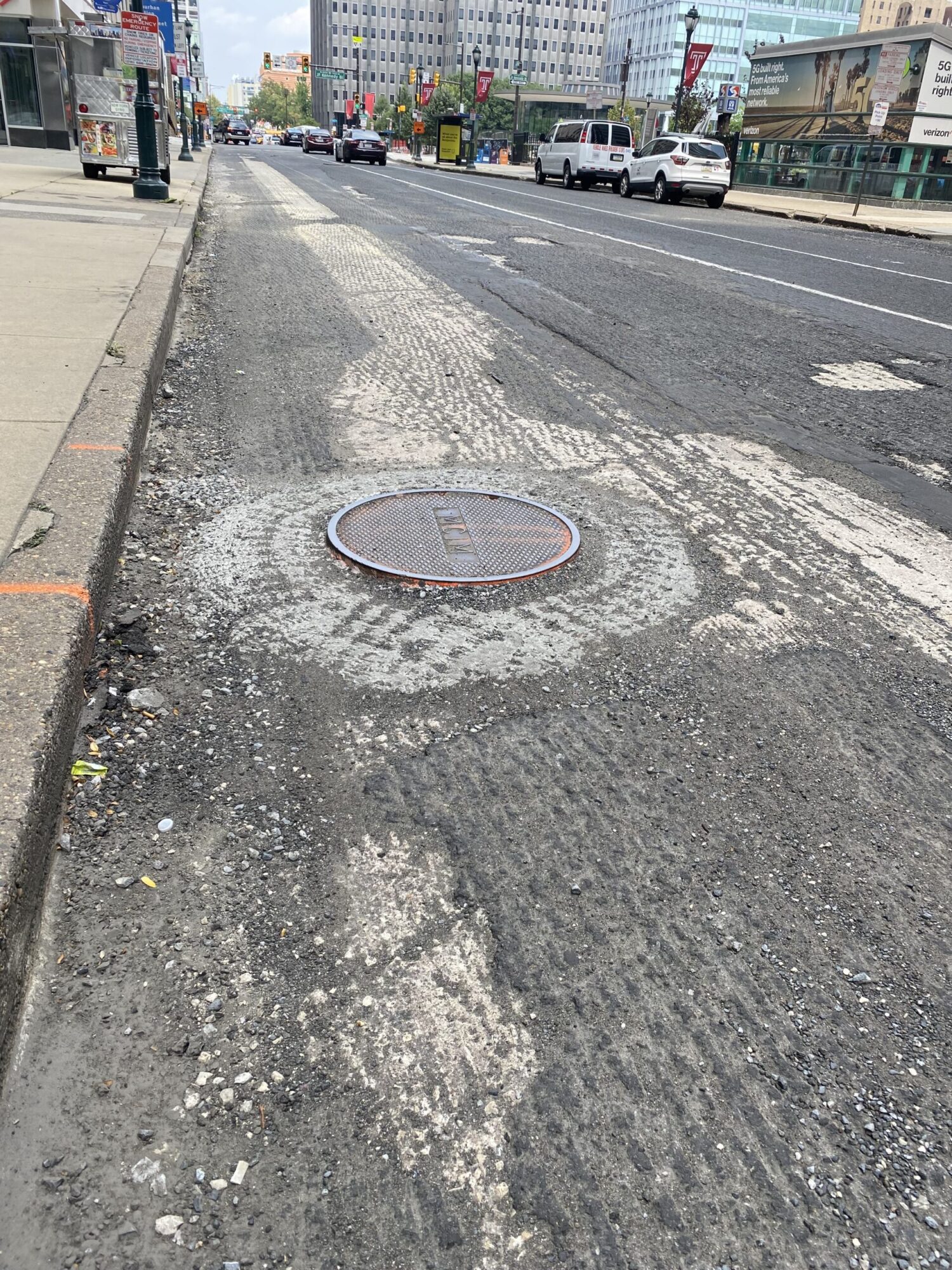 “On a typical day, over 80,000 people pass through the intersection of Broad & Chestnut, including people walking, biking, taking a bus, and driving,” said Mayor Jim Kenney. “It’s our responsibility to make investments in public infrastructure to meet their needs.

How Did the Trip and Fall Happen?

In the 9 am rush hour, my client emerged from the Walnut street subway stop walking towards her first day of work at her new job. As she exited the subway she joined the throngs of people waiting at the intersection to cross Broad Street from west to east. Unbeknownst to her, Broad Street had been “milled” the night before in anticipation of a new coat of asphalt.  “Milling” is a process in which the upper layer of the asphalt is removed from a roadway and then re-leveled. The milling process creates elevations and depressions within the roadway as well as irregularities where man hole and utility covers protrude.

As my client was crossing Broad street her foot caught on the roadway and she fell, struck her face on the ground and was knocked unconscious.  She awoke to a good Samaritan calling an ambulance and was promptly taken to the hospital for evaluation. At the hospital, she was treated for face lacerations, given x-rays and released. The client thought everything was ok, but as time went by she realized she was having trouble walking and getting up from a seated position. After about a month she went for an evaluation at Rothman Institute where it was discovered she had fractured her hip in two places from the fall. Unfortunately, she was forced to undergo a full hip replacement.

This was a considerably difficult case that only achieved settlement after being fully litigated.  The greatest difficulty in the case was that the client could not pinpoint exactly what caused her fall as she was knocked unconscious…..and since the road was quickly repaved….there was no photographic evidence of the fall. Compounding these issues, the client had waited almost three months after the fall before hiring personal injury lawyer Troy Crichton. By the time, attorney Crichton was involved any evidence had been destroyed and he had to re-build the case from scratch. Although the Defendants who had performed the street work had policies and log books demonstrating their safety measures, Attorney Crichton was able to show that while they had taken safety measures…..these measures were all vehicular focused. From painting the manhole covers orange, posting “rough road” signs, as well as allegedly marking the elevations within the milling, the precautions taken by Defendants mainly dealt with vehicular traffic, not pedestrian traffic.  Attorney Crichton was able to show that the Defendants were negligent because they had not taken sufficient actions to warn pedestrians that the road was unsafe or in disrepair and secured a substantial settlement for his client.

Philadelphia Lawyer For Your Slip and Fall Case

If you believe that you have a personal injury case, Troy R. Crichton can help you. He is an experienced litigator who can help assist you through every part of your legal case. Contact us at (267) 225-3317  today for your free case evaluation. All of our personal injury cases are handled on a contingency basis, so you won’t pay unless and until you receive a monetary award for your case.

If you want to know more about Slip and Fall Accidents you can read informational blogs here.